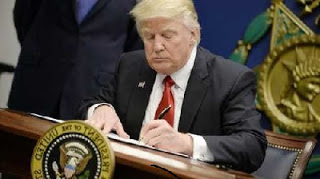 Few days into the office the current US President, Donald Trump issued an executive order banning citizens of certain countries from entering United States of America (US) due to his belief in their terrorist involvements. That first order could not work due to public protests, court orders, and misunderstandings which brought a lot of confusions into it. A revised order is now giving.

President Donald Trump has signed a new executive order placing a ninety-day ban on people from six mainly Muslim nations. Trump administration officials say that even with the changes, the goal of the new order is the same as the first: keeping would-be terrorists out of the United States while the government reviews the vetting system for refugees and visa applicants from certain parts of the world.

In fact, Iraq which was covered in the previous seven-nation order has been removed from the new one after agreeing to additional visa vetting measures.

The directive, which includes a one hundred and twenty-day ban on all refugees, takes effect on 16 March. 2017

For more understanding about US immigration law, read the following topics:

When did the immigration laws start?

How many immigrants are in the United States?

How many legal immigrants are allowed each year?

The US immigration and naturalization act

The previous order, which was blocked by a federal court, sparked confusion at airports and mass protests.

Presented as a means to strengthen national security against terror threats, it was blocked by the courts and effectively remains on hold.

In justifying the refugee ban, Mr Sessions said there are more than 300 refugees under investigation for potential terror offences. But no further details were given.

Citizens of Iran, Libya, Syria, Somalia, Sudan and Yemen, the other six countries on the original 27 January order, will once more be subject to a 90-day travel ban.

White House officials said Iraq has been taken off the banned list because its government has boosted visa screening and data sharing.

The new directive says refugees already approved by the State Department can enter the US. It also lifts an indefinite ban on all Syrian refugees. Green Card holders (legal permanent residents of the US) from the named countries will not be affected.

The new order does not give priority to religious minorities, unlike the previous directive. The three Cabinet secretaries held a joint news conference to discuss the new directive.